The European mink has disappeared from Finland, Estonia and many other European countries. Now it is being introduced to Hiiumaa in Estonia. 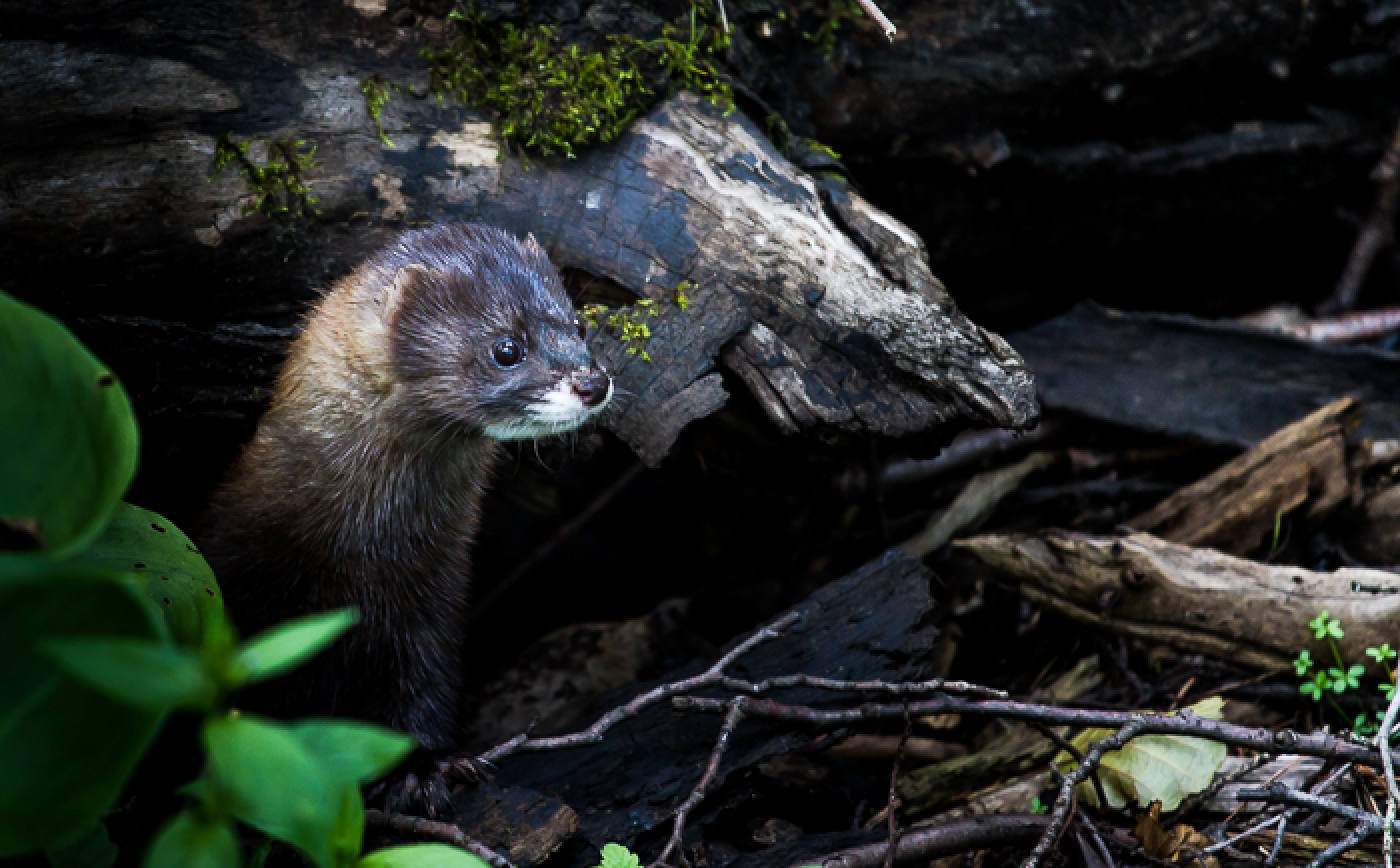 The extremely endangered European mink is getting help from ex-situ conservation and introdutions back to nature. Photo: Tiit Maran

The European mink international conservation centre lies in a shallow building in the outskirts of the Tallinn zoo, under mighty trees. There I meet the chief of conservation, Tiit Maran. He is busy, active and alert – somewhat like his protege the European mink. Maran´s cell phone rings frequently, and his colleagues treat him ”tere tere” and tell him the newest tidings from the animal shelters. 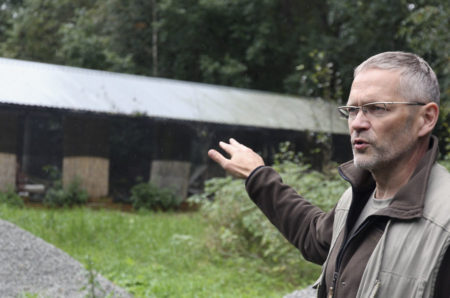 Tiit Maran and his colleagues aim at returning the European mink into nature in Estonia. Since the year 2000 animals raised in the zoo have been transferred to the Hiiumaa island almost yearly, to reinforce the population founded there.

The decision to naturalize the European mink in Hiiumaa was based on the possibility to remove the alien species, American mink, from the island before the introduction of the European mink. 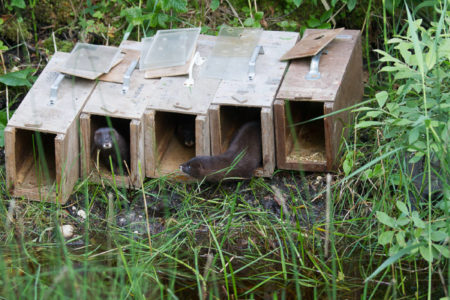 Introducing European minks to their new environment in the wild. Photo: Tiit Maran

2014 was the first year when the European mink population needed no replenishment from the zoo. The population has grown slowly but continuously. The European minks now seem to have colonized the island permanently.

In the spring of 2014, about fifty and in the autumn already a couple of hundred individuals were found in Hiiumaa. Three fourths of the small watercourses fit for European minks were inhabited. In 2015 European minks scurried already in all of the examined 60 habitations. 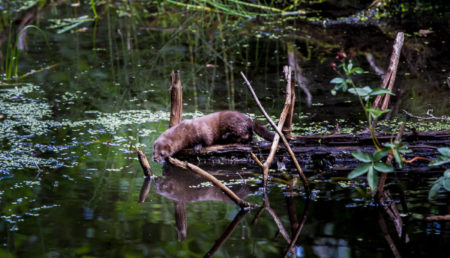 The European mink disappeared since the mid 20th century from most of its old living areas in Europe and Asia. The foremost reason was the loss of its habitats, natural small watercourses, but also the introduction of the farmed American mink from America to the old continent.

Being stronger, the American minks, escaped from farms and released on purpose, overtook the habitats of the European mink. The popularity and at the same time the huge price increase of mink furs, accelerated the hunting of also the European mink during the first half of the 20th century.

Thus the European mink ended up in its current status, an extremely endangered species, in the classification of the IUCN.

Refuge in the Danube Delta? 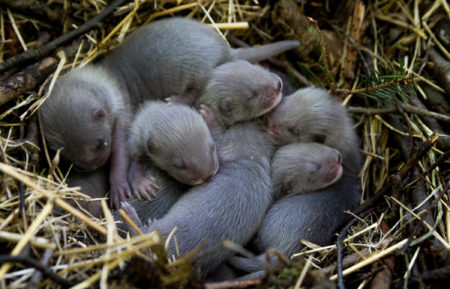 The strongest population of European minks lives nowadays in Romania, where the Danube Delta hosts approximately 1500 individuals. – It is however only a question of time, when the American minks living in the Danube overtake the delta from the European minks, says Maran.

Northern Spain has a population of less than 500 individuals, and the living area of the European mink is shrinking also there, as the population of American mink grows. France lacks official data, but there are at most 200 European minks. In Russia European minks inhabit probably only areas in the northern Urals close to the tundra, and in Caucasia. – I tried to buy European minks from Russia, but they did not have anything to sell, says Maran regretfully.

Climate change does not bother the species

The European mink is adaptable to different temperatures and nourishment. It gets along from the Mediterranean area to the northern tundra, and as a carnivore, it accepts many small creatures: rodents, fish, crabs, frogs, even bird nestlings. 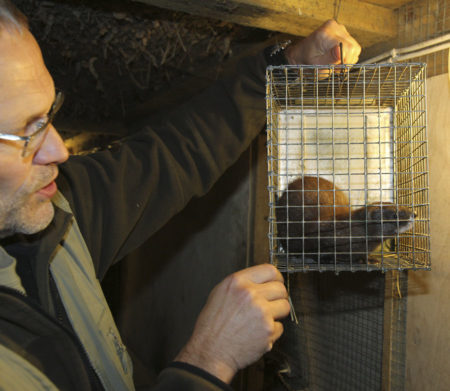 This European mink slipped curiously to the research cage from its pen, right when she heard someone come to greet. Photo: Seppo Leinonen

– The European mink is however not such a bird destroyer as the American mink, because it keeps on the strands of brooks and ponds and does not move over to the sea shores or bird islands to empty the nests.

Because of the adaptivity of the European mink, climate change does not overshadow the future prospects of the species. All the European mink asks for is natural brook strands and peace from the stronger alien species.

The future of the European mink

Can we foresee light in the future of the European mink? Could the status at some time be less endangered? Tiit Maran is pessimistic about the development in general:

– I am afraid there will be a larger catastrophe, when the question of the survival of a single animal species is meaningless. On the other hand, saving even one species helps the biodiversity, and there are many good things happening in the protection of the European mink.

– Hiiumaa can be called a success story for the European mink. Also in Germany there are two reintroduction projects in progress, and the first nature-born cubs have just been found in one of them. 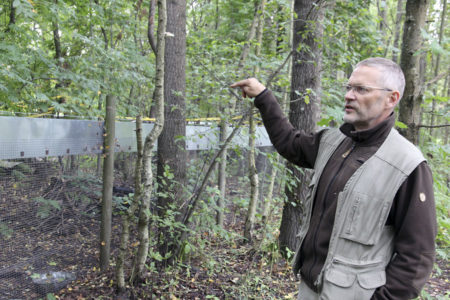 In the zoo´s adaptation enclosures the European mink pups get their first contact with nature, before being transferred to Hiiumaa. Photo: Seppo Leinonen

– I am now trying to broaden my thinking. For example our conservation work in Hiiumaa has been fire brigade work. We have to strive further, towards preventive habitat protection and towards changing people´s attitudes more positive towards conservation.

– We intend for instance to restore old, ditched brooks in Hiiumaa. We shall also install traffic signs warning of European minks close to bridges. They communicate effectively of the species and prevent traffic deaths of the minks. 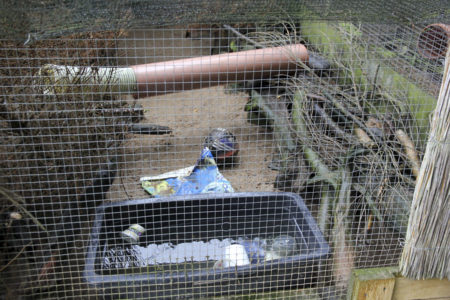 The pens are small compared to the natural movement area of the minks. Activities are provided by e.g. hiding their food and placing different toys in the pen. Photo: Seppo Leinonen

– We aim at returning the European mink also to Saaremaa. We tried it already a couple of years ago, but the minks turned into expensive fox fodder. In the future we can manage it better, so that the minks get to acquaint themselves into the new surroundings and learn to coexist with the foxes too.

Could the European mink be reintroduced into the nature in Finland? – No it cannot, unless the wild American minks can be first removed, and that will not succeed, unless the mink farming is finished, Maran states. 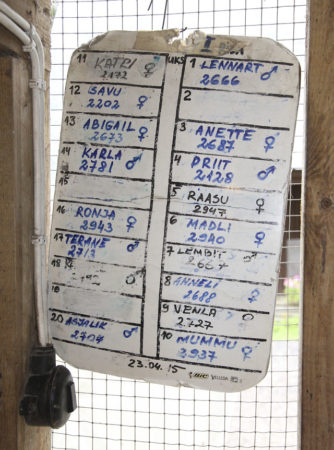 The animal keepers know the individual European minks and their personality traits. Some are especially curious, some are playful and all are agile. Photo: Seppo Leinonen

In addition to reintroductions to the nature, the family of the European minks is preserved in zoos. They are raised in 14 European zoos, in which their genetic heritage is protected carefully. This is called ex-situ conservation, which means conservation outside of the natural habitat of the species.

Tiit Maran keeps score of the genetics of the European minks in different zoos, and he plans, which individuals best suit to reproduce together. Before the reproduction period these mink girls and boys are sent to new homes. So Maran runs an international dating service for European minks.

– Every spring at our mink ranch we have what we call the ”spring madness”. It means monitoring the heat of individuals sent from different zoos and the bringing together of suitable couples when the time comes. Examining the heat situation of say one hundred females every other day is quite a job.