This article was published in Finnish in Luomulehti 6/2015. 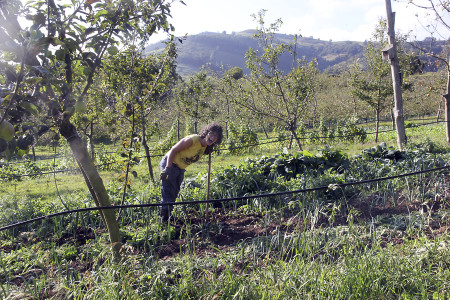 Paula Cristóbal changed her teaching job to gardening at the El Nocéu organic estate. The birdhouse pole attracts insect-eating birds to nest in the garden and birds of prey to catch small rodents.

– Here on the hillsides of Northern Spain we have good conditions for organic farming, says Santiago Perez, master of the oldest organic garden La Campana in Asturias and a highly considered pacemaker in the field.

In the mountainous and rainy Asturias in the coastal areas of the Atlantic, garden products are produced all year round. The majority of the organic acreage is used by livestock, but vegetable and cider production on small estates is increasing and especially young people are taking up the career.

In mid October corn has been harvested from La Campana´s field, and different brassicas, carrots, leaks and pumpkins await picking. The seedlings of Christmas cabbages and the green manure to be cultivated into soil in February or March now green the fields. Tomatoes and peppers in the greenhouses are giving space for lettuces, carrot and other winter crops. 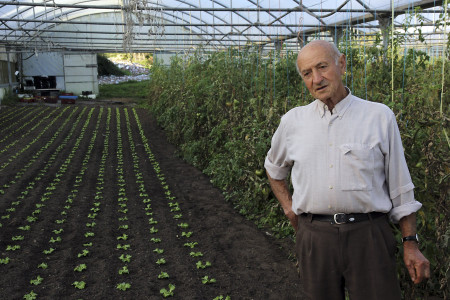 Master Santiago Perez in a greenhouse of La Campana. In August tomatoes and peppers give space to lettuce, carrot and other winter crops.

The temperature in the farming areas of Northern Spain seldom drops below zero, and so also winter is part of the growing season, albeit slower than summer. The organic gardeners need not heat or light their greenhouses.

– In Southern Spain they do have more heat, but they are also short of water and the plants need shading from too much sun. In that sense our production is more natural, Perez says.

The irrigation water at La Campana comes mainly from a large sink, which gathers the rain water from the buildings of the estate. 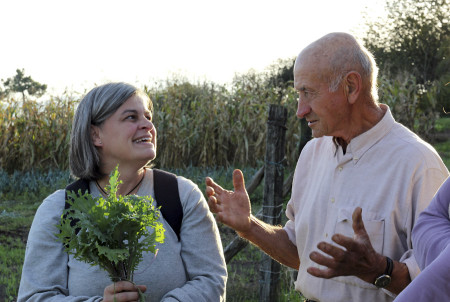 Organic production has been on the rise in Asturias for about ten years. The amount of operators grows, there is demand for the products and new systems for direct sales are founded.

– More producers are needed all the time, and they do appear. The economic crisis has induced many to consider the farming profession, and this field interests young people also otherwise, tells teacher of biology and organic gardening Clara Rodriguez of Gijón.

– Managing the economy is, however, hard for those, who have to take a big loan to buy land. Those who own or inherit a farm, get started easier, says Rodriguez. 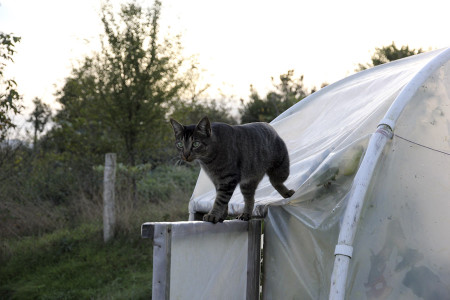 The guardian of the permaculture patch behind the organic vegetable plots at La Campana.

Youngsters study the basics of organic farming in a two-year vocational school in Luces, or they practice at Asturian organic farms. Many are mentored by an experienced organic farmer, and the official education is not obligatory for gaining organic status. Education is required only for getting the economic support for starting young farmers.

Rodriguez teaches organic gardening also for adult enthusiasts. Courses are held in the famous botanic garden of Gijón, which has a large exhibition of useful plants.

Santiago Perez is a former railroad worker and the first organic gardener in Asturias. The estate switched to organic production in the 1980´s.

Perez was inspired to the field by his son Valentin Perez, who as a doctor got interested in the healthy and non-poisonous alternative and studied the practice in Madrid.

Perez is now 82 and his spouse Longina García 79 years old. Both still work full time on the farm, because they like the work and want to teach it to others. Santiago Perez is in charge of the machinery and cultivation planning, and Longina García accounts for marketing. 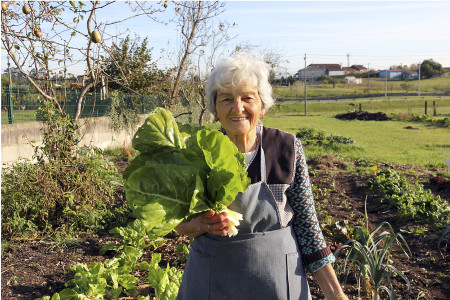 Longina García is in charge of marketing at La Campana and takes care of the organic shop of the farm.

There are also two other partners in the cooperative that runs the farm. One of them works on the farm and the other in the shop in Oviedo, the capital of the province. In addition, lots of trainees, visitors and students visit the farm. 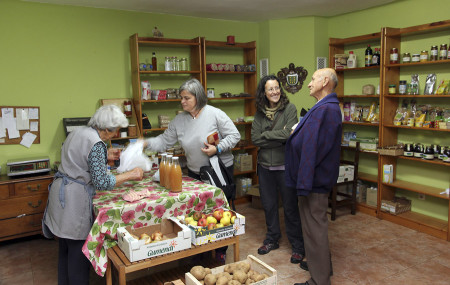 The owner couple of the farm La Campana in their shop with regular clients.

The products are sold from own shops and as product boxes delivered directly to consumers. The farm has not started market-, internet- or food circuit sales, because even with the old means the demand continually exceeds the supply. 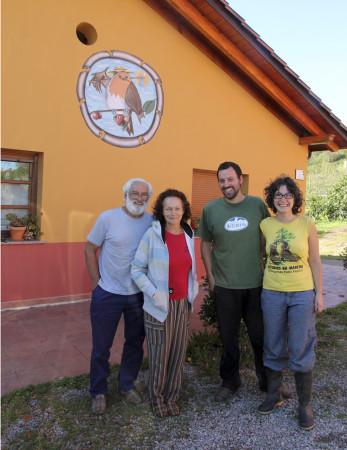 The old owners and the new stewards of the El Nocéu cider and garden estate.

– The owners of the cider and garden farm El Nocéu once learned the profession from La Campana and Santiago Perez. Just recently there has been a generation change at the farm, tells Antón Cadierno, one of the new stewards.

With the education of a chemist Cadierno now manages the farm together with his two partners. The old owners Aquilino Gonzáles and Laude San José own the farm, live on it and guide the new stewards.

There are two grand apple orchards on the farm, the apples of which are processed mainly to cider. Also apple vinegar and dessert apples are sold. 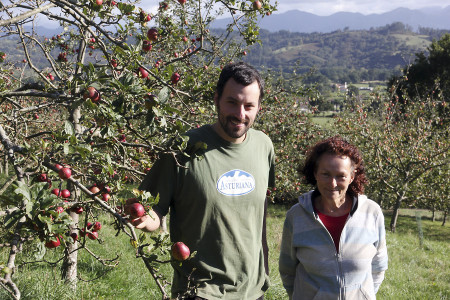 – Cider is sold mostly in the summer. The most important source of income are the garden and the greenhouses which produce around the year. Their products we sell at the market once a week and on other weekdays from our own shop on the farm.

For Cadierno and his partners shifting to gardening meant a change from a stressful life rhythm to a job which is peaceful and close to nature. 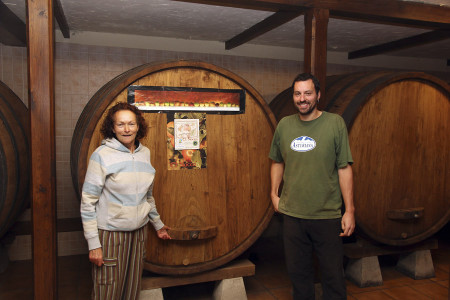 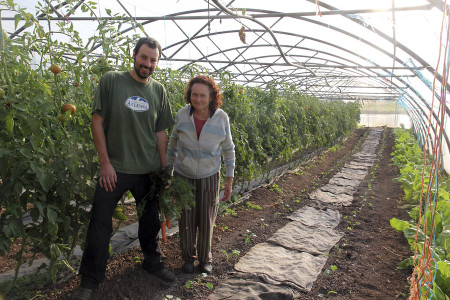 In october the winter cabbages were planted in the unheated greenhouses of El Nocéu. Carrots sprout under the blankets.

This site uses Akismet to reduce spam. Learn how your comment data is processed.